Here's a nice fact about the natural numbers:

Well-Ordering Principle. Every nonempty collection of natural numbers has a least element.

Observe, before we prove this, that a similar statement is not true of many sets of numbers. The interval

Proof. We'll prove the contrapositive, namely, that if a collection of natural numbers has no least element, then it must be empty.

be a nonempty collection of natural numbers. Consider

, the natural numbers that aren't in

. If any of the numbers less than

, then one of them would be least (since there are only finitely many such numbers and we proved every finite set has a least element). So none of the numbers

would be least. So

. This completes the inductive step.

So we've shown that every natural number is in

must be empty. This establishes the contrapositive of the theorem.

The Well-Ordering Principle can be used to prove all sort of theorems about natural numbers, usually by assuming some set

is nonempty, finding a least element

, and ``inducting backwards" to find an element of

--thus yielding a contradiction and proving that

is empty. In this sense, the Well-Ordering Principle and the Principle of Mathematical Induction are just two ways of looking at the same thing.

Indeed, one can prove that WOP, PCI, and PMI are all logically equivalent, so we could have taken any one of them as our fifth axiom for the natural numbers.

Fundamental Theorem of Arithmetic. Any natural number greater than 1 can be written as the product of primes.

be the set of natural numbers greater than 1 which cannot be written as the product of primes. By WOP,

has a least element

cannot be prime, so

is composite. Then we can write

had prime factorizations, then so would

. Therefore at least one of

does not have a prime factorization (by relabeling, we can assume it's

was not least in

This contradiction establishes that

has no least element, hence by WOP must be empty. So every natural number greater than 1 can be written as the product of primes.

Observe that this proof has more or less the same ``juicy bits" as the proof by PCI.

be natural numbers. Then there are nonnegative integers

are unique. We call

This theorem is called the Division Algorithm because it asserts that any natural number can be divided, with remainder, by any other natural number.

We are left with the case

is nonempty, by WOP,

has a least element, which we'll call

, but we need to show that

cannot be an element of

We need to show that

. Suppose, to the contrary, that

, which is an element of

. This contradiction establishes that

Now that we have established the existence of

Without loss of generality, assume

. We will show that

, i.e. the quotient-remainder pair is unique.

as above, with least element

cannot be a quotient. So

from both sides we have

. This contradiction establishes that

So we see that

. But the same argument applies to

Corollary. Any integer is either even or odd.

Proof. Given an integer

is even we're done. So suppose

is not even, i.e. we know that we cannot write

The division algorithm says we must be able to write

. Since we ruled out

Note that we established previously that no integer could be both even and odd. Now we know that ``odd" and ``not even" are, in fact, synonyms.

We can use the WOP to give a kind of induction proof in disguise. Consider:

Claim. The sum of the first

Ordinarily, we'd prove this by induction.

Exercise. Write a proof of this claim by ordinary induction.

But we can set up a proof that uses the Well-Ordering Principle, like this:

Proof. Suppose not. Then there is some natural number (call it

) so that the sum of the first

. Consider the set of all such numbers:

Our assumption is that

is not empty. (We believe in our hearts that there are no such numbers, i.e. that

is empty. But this is a reductio ad absurdum proof, so we'll have to roll with it.)

By the Well-Ordering Principle,

has a least element, which we'll call

, after all, was least among the elements of 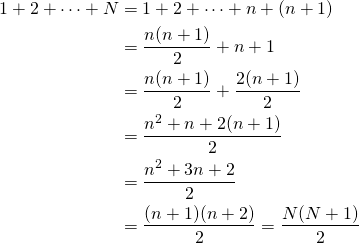 which shows that actually,

. But this is a contradiction! So our initial supposition was incorrect, and thus the claim is true.

Now, I've highlighted some parts of the proof in green and orange. Why? The green part is what would be the base case if we wrote an ordinary induction proof. The orange part is the inductive step (from

In fact any proof by ordinary induction can be gussied up this way, if you desire.