is the smallest infinite set; this makes

a pretty good place to get started. But our ideas about size have to do just with bijections, so whatever we'd say about

we could also say about any set which is equivalent to

denumerable, and we call any bijection

countable if it is either finite or denumerable. Sometimes denumerable sets are called countably infinite.

Theorem. Any subset of a denumerable set is countable.

is not finite; we'll show that

is denumerable, there is a bijection

. We'll construct a denumeration of

For the base case: by the Well-Ordering Principle, there is a least element of

. By injectivity, this element is the image of a unique element of

is not empty, so

is not empty. So

is a nonempty subset of

, hence by the Well-Ordering Principle has a least element. By injectivity, this element is the image of a unique

, which is distinct from all the

Proceeding in this way, we construct a bijection

will be one of the

will occur in the list of values. So we have

Corollary. The following sets are equivalent to

Proof. These are all infinite subsets of

. Since they're not finite, they must be denumerable.

Theorem. Any subset of a countable set is countable.

is countable and there is an injection

is countable and there is a surjection

One weird thing about denumerable sets -- actually any infinite set -- is that if you add a single element, the set doesn't get any larger.

Proof.  The bijection is given by sending

Okay, but what if we tried to add an entire additional copy of

Proof. We'll give a bijection

As an exercise, show that this function is a bijection. Actually, givetwo proofs: one by showing it is injective and surjective, and one by building the inverse function.

Notice that this is a bit weird:

is the union of two disjoint sets, each of which is equivalent to

. But it's no bigger than

as a grid of points in the plane: 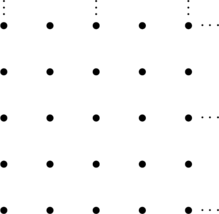 and then denumerate them in any order we like, starting perhaps from the origin and snaking around like so: 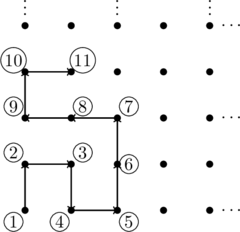 Now let's go from this special case to the general case.

Proof. This is homework.

To complete the proof: we know that

are denumerable, so we have

. So by the lemma

. So by transitivity of

Proof. By the theorem above,

is countable. There is a surjection from

is countable. But we have an injection from